Officers Schmidt and Jenko are back again for the biggest bromance of the summer. Previously on the film 21 Jump Street, this pair of police officers went undercover, disguised as […]

Officers Schmidt and Jenko are back again for the biggest bromance of the summer. Previously on the film 21 Jump Street, this pair of police officers went undercover, disguised as high school students, to stop the spread of a new drug that was being distributed throughout the campus. Their mission was a success, and now the buddy cop duo returns with a new assignment – or actually the same assignment – but this time they’re going to college! 22 Jump Street has essentially the same exact premise as its predecessor and shamelessly spares no expense in letting you know it. It’s a running joke throughout the film with characters blatantly reminding you of the similarities. It may be a familiar foray, but 22 Jump Street still manages to be loads of fun and is without a doubt one of the funniest movies of the year. 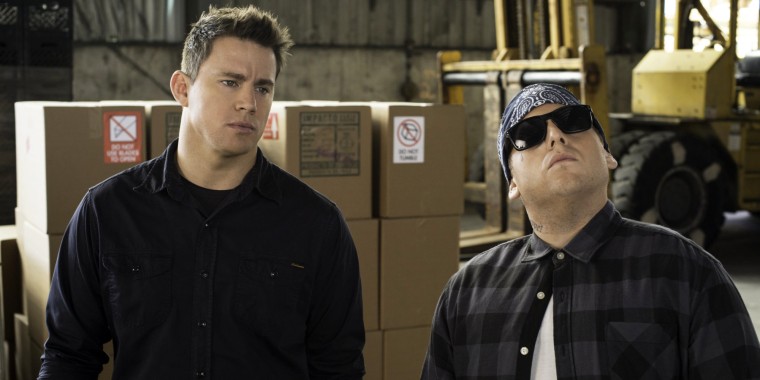 One of the strengths of 22 Jump Street is that it never takes itself too seriously. Right off the bat, it sarcastically sets the stage through a cheesy and overly-dramatic recap of the first film that feels like it’s straight out of a ‘90s TV series. The movie continues to poke fun at itself every step of the way, reminding you that the creators are very much in on the joke. Rather than coming off as a lazy rehash, 22 Jump Street’s self-awareness makes it feel fresh and inviting. The whole movie plays out like a fourth-wall-breaking inside-joke between the actors and the audience. It openly acknowledges that it’s silly and redundant, but in doing so, it encourages us to put that aside and just sit back and have a good time. All in all, I most certainly did have a good time, and 22 Jump Street ended up being far more funny and enjoyable than I ever expected.

As much as I liked the movie, I have to say that it’s awfully heavy on the bromance. Many of the jokes revolve around the relationship between Jonah Hill’s Schmidt and Channing Tatum’s Jenko, and it gets to be pretty excessive and overdone. While Schmidt struggles to fit in at college, Jenko is accepted with open arms and quickly befriends the star quarterback Zook, played by Wyatt Russell, who recruits him to join the university football team. This puts a serious strain on Schmidt and Jenko’s friendship, and the film revels in their troubled relationship, portraying them like a bickering couple. The problem, however, is that it continuously stresses this bromance to the point where it becomes more awkward than funny. Additionally, as Schmidt feels more and more out of place without Jenko, I think Jonah Hill similarly falls more and more out of place in this film.

Jonah Hill and Channing Tatum make for an adequate comedic pair, however I find that Hill struggles in scenes without his co-star. While I respect Hill as an actor, it’s Tatum that truly carries the film, further establishing himself as a Hollywood star. He’s not only the funnier of the two, but he’s also highly entertaining and a perfect fit for an action star. He’s a natural in the movie’s comical action sequences, which include car chases, shootouts, and a well-choreographed fight scene on the beaches of Cancun. The movie drags on through Hill’s mopey solo scenes, only to be reinvigorated by Tatum’s humor and enthusiasm. Though the two of them play well together, I can’t help but feel like perhaps Hill should consider sticking to more dramatic roles.

While some of Hill’s attempts at humor fall flat, most of the comedy in the movie does work. Ice Cube is a stand-out in his return as police captain Dickson and his short temper creates some of the movie’s more memorable scenes. Meanwhile Tatum’s Jenko makes for a perfectly lovable and amusing airhead. The movie is chock-full of clever self-referential jokes and has an elaborate credits scene that expertly basks in its own egotism. 22 Jump Street is a movie that knows full well what it is and is proud of it.

22 Jump Street may be more of the same, but it’s completely content with that and wagers that you will be too. It’s a fun and comical adventure through college, and is coincidentally one of the best comedies of the year.