So many movies make sharks out to be relentless, monstrous, and murderous killing machines. Not only is it scientifically inaccurate, but it’s an unfair depiction solely manufactured for the sake of cheap scares. In part one of this blog, I dive into which movies get it wrong and which ones get it right.

As you probably know by now if you’ve been reading my reviews, I genuinely hated watching 47 Meters Down: Uncaged. For me, it was a terrible and torturous experience. There are so many issues I have with the movie, but there’s one problem in particular that I decided to leave out of my review to talk about here in greater detail. It’s something that bothers me that is actually prevalent in many shark movies. Too many movies make sharks out to be relentless, monstrous, and murderous killing machines. Not only is this scientifically inaccurate, but it’s an unfair depiction that’s manufactured solely for the sake of cheap scares.

Yes, of course I understand that these are just movies, and that making sharks into monsters is used as a means to heighten fear and intensity, but I feel like most of the time it’s taken to such an extreme that it winds up having the reverse effect as a result. Even the more realistic movies tend to overdo it with their shark attacks, which at times personally takes me out of the moment and breaks my suspension of disbelief. These movies often take a real life legitimate fear that so many people have and crank it up to the point where it’s downright silly. Perhaps this is why so much of the genre has evolved into parody, bolstered by the rising popularity of farcical movies like Sharknado, and Sharktopus, and Mega Shark vs. Mecha Shark.

To me, this begs the question: Are sharks not scary enough already? Is it really necessary to make them into these over-the-top, hyper-aggressive, and always-hungry caricatures of themselves? If you have any character in the water and add a shark to the equation, that alone is going to create a suspenseful situation. We know how deadly they can be, but that doesn’t mean that they always need to be. When you’ve got a shark in a movie viciously attacking and killing person after person like it’s the Terminator, it’s total overkill and is completely removed from reality. It’s true that sharks are predators, but they hunt for food, not for sport. They’re also typically not interested in humans.

In doing research for this topic, I stumbled upon some startling shark attack statistics that I’d like to share with you, but rather than deviate from my original topic here, I’ve decided to break this blog into two separate parts. In part 1 of this blog, I will examine a few popular shark movies in order to look at the way they depict these magnificent underwater creatures.

First and foremost, I think I’m practically obligated to begin with the quintessential shark movie, Jaws. A film that literally made people afraid of swimming in the ocean (and hilariously somehow even swimming pools) for decades. It features a giant great white shark that develops a vendetta against our trio of shark hunters after they attack it. It’s a fight for survival on both fronts, as the hunters become the hunted. Jaws is one of the all-time great horror films, and while obviously exaggerated in ways, this is just one case of a freakish nightmare of a shark. It’s hard not to love, and even harder to be mad at.

Another one of my favorite shark movies is Deep Blue Sea, which admittedly does portray sharks as monstrous predators, but also justifies this erratic and violent behavior by writing it straight into the storyline. These are sharks that have been experimented on and genetically engineered with good intentions but deadly consequences. This is a classic case of humans messing with nature, and nature fighting back. I happen to love it!

Then there’s The Meg, in which a team of explorers accidentally uncover and unleash a prehistoric shark in the deepest depths of the ocean, known as a megalodon. Thought to be extinct for millions of years, the megalodon returns to the ocean surface after being disturbed by human interference to terrorize the modern world. It’s absolutely ridiculous premise that isn’t meant to be taken seriously, and as far as I’m concerned, it’s a whole lot of fun.

In all three of the aforementioned films, the sharks are attacking humans as a result of being provoked. I happen to find this to be a more tolerable approach for shark movies. The sharks are the initial victims here, but they fight back and turn the tables. This ends up putting humans and sharks, each the top of their respective food chains, in a great clash for dominance and survival.

On the more negative side of things, we have The Shallows, starring Blake Lively, who plays a surfer that is attacked by a shark and survives by climbing atop a rock that’s exposed by the low tide. She’s stranded far from shore, and once the tide comes in, she’ll have nowhere left to hide. It’s an interesting concept but suffers from what I’m going to call “psycho shark syndrome”. Not only is her character’s initial attack entirely unprovoked, but this psycho shark devours anyone (and anything) that comes within its path. Without spoiling anything, I’ll just say the kill count is high and the shark even chomps its way through a metal structure to try to get to our protagonist. In my opinion, this is an example of a good movie that is ruined by taking things too far.

Then there’s 47 Meters Down: Uncaged, in which blind sharks are attacking and killing people at will inside an underwater Mayan labyrinth. While it’s true that sharks can be territorial and may fight to protect themselves if they feel threatened, the sharks in this movie are just trying to kill everyone they can. Sure, it’s meant to be fun and entertaining, but it’s unreasonably excessive. The sharks are literally hunting humans at any cost. I’ll give a pass to the ending scene, which I won’t spoil, because the sharks are being baited into violence. However, as far as the rest of the movie goes, it’s completely unrealistic and is needlessly vilifying sharks. While I haven’t yet watched the original film, judging from the trailer, I think it’s apparent that it’s no different from this one.

While there are still dozens of shark movies I have not seen, sharks very clearly tend to fall into this later category of being exploited as purely evil creatures. I wish that wasn’t the case and that movies would represent them more fairly and with more complexity. Ultimately, I believe the best suspense comes from mixing danger and uncertainty, so there’s really no need for this unfairly vicious depiction. As it turns out, there may very well even be real-life consequences that have resulted from this harmful and dishonest portrayal of sharks, and I will discuss this topic further in part two of this blog, which will be released some time soon. To conclude, all I’m really saying is sharks just can’t seem to catch a break. Not even in the movies. It’s a hard shark life! 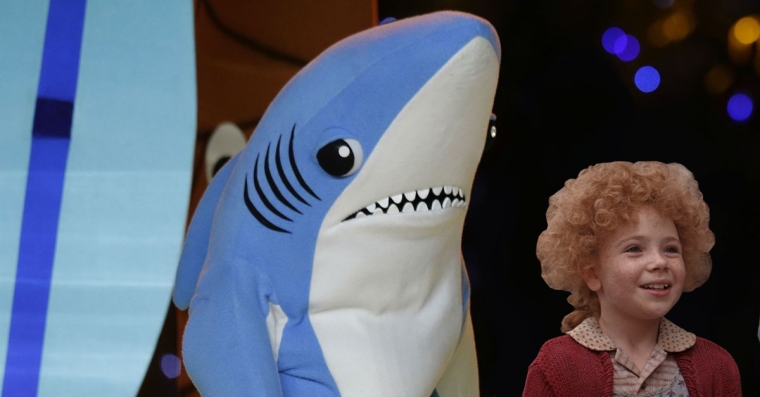